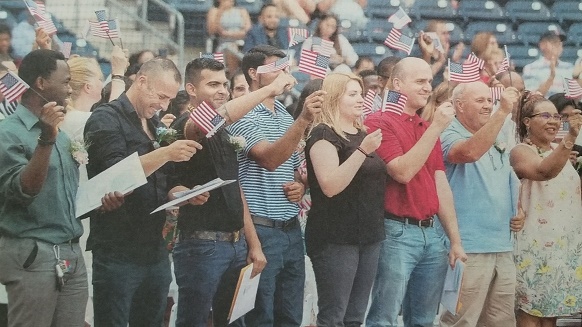 Sixty Connecticut residents became naturalized US Citizens in a ceremony held at Hartford’s Yard Goats stadium before a game held on July 3rd, 2019. The new citizens came from 31 different countries in pursuit of freedom and the American dream.

US Senator Richard Blumenthal, Connecticut Lt. Gov. Susan Bysiewicz and Hartford Mayor Luke Bronin were among those formally welcoming the new citizens. Many echoed the sentiments of Richard Blumenthal, who stated, “Nothing could be more American than the Fourth of July, baseball, and immigration. We are a nation of immigrants, and we are proud of it.”

More information, can be found in this article from the Hartford Courant’s website.

featured photo from The Hartford Courant, 7/4/19